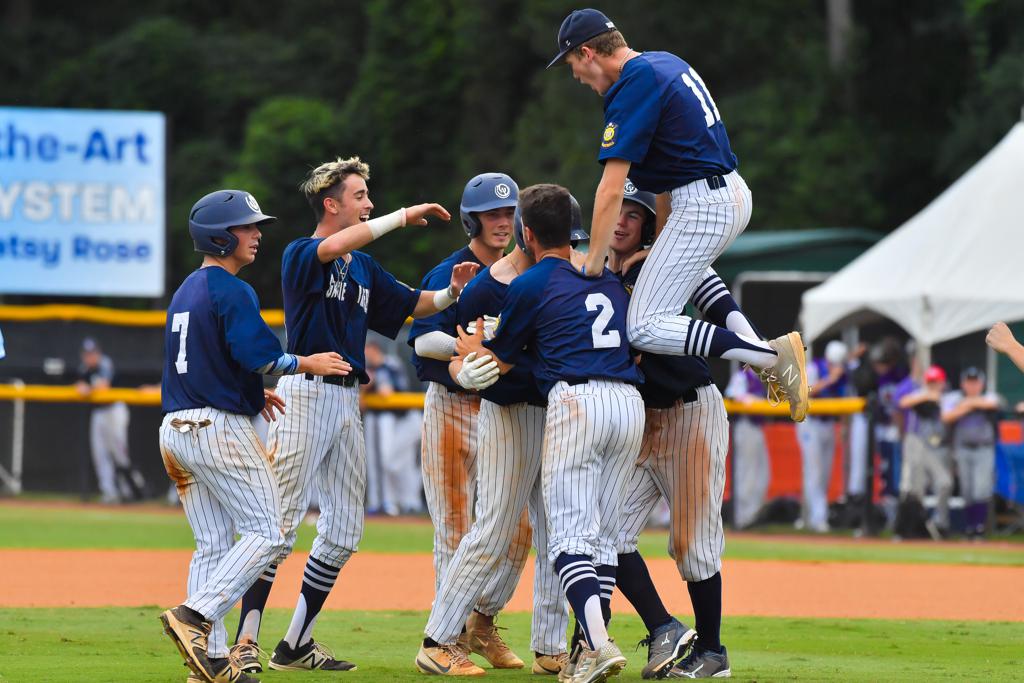 After Wilmington Post 1 ties the game in the top of the seventh, Gonzales Post 81 wins in the bottom of the inning.

Preston Thrash came to the plate in the bottom of the seventh inning with a chance at redemption.

In the top of the inning, Thrash came on in relief and gave up the tying runs to Wilmington (Del.) Post 1 in Friday’s matchup against Thrash’s team, Gonzales (La.) Post 81.

But with one out and runners on first and third, Thrash laid down a textbook perfect bunt to score Reid Bouchereau with the winning run in Gonzales’ 5-4 victory at the American Legion World Series.

“Everybody’s thinking for me to swing,” Thrash said. “Lay (the bunt) down perfectly, I know we score.

“Definitely makes up for (the top of the seventh),” he added.

The victory improved Gonzales to 2-0 in pool play and left them alone atop the Stripes Division. They’ll wrap up pool play in the final game on Saturday in Shelby, N.C., against Dubuque County (Iowa) Post 137. The Iowa team was facing Braintree (Mass.) Post 86 in Friday’s second game.

Game 5’s battle of unbeatens — Wilmington came in off Thursday’s victory over Dubuque County — saw the Delaware squad score first when Nate Thomas singled to drive in Austin Colmery in the top of the first.

Gonzales tied the game at 1-1 in the bottom of the second when Jordan Badame scored on Brayden Caskey’s two-out single. The Louisiana team took a 2-1 lead after three as Jack Merrifield scored when Bouchereau was hit by a pitch with the bases loaded.

But Gonzales ended both the second and third innings with the bases loaded.

“We left a lot of guys with bases loaded, but we loaded them with two outs. So we didn’t have an opportunity to do too much but wait for the hit,” Gonzales coach Martin Luquet said. “Their pitchers were bringing it pretty good.”

Wilmington tied the game again in the top of the fourth, with Eric Ludman scoring on Jon Golebiowski’s single. Gonzales regained the lead in the bottom of the inning, with a two-out, bases loaded walk bringing in Zane Zeppuhar.

Gonzales made it 4-2 in the sixth when Merrifield scored on Carson Dabadie’s single. But Thrash walked Chris Ludman and gave up a double to Colmery before Michael Cautillo drove them in to tie the game.

But Bouchereau started off the bottom of the seventh by drawing a walk to help set up Thrash’s heroics.

“(I told them) it was only tied up, and we could walk them off right here. We just have to get the first guy on. … we’ve bunted like that before the win, so it was nothing new,” Luquet said.

As for Thrash, Luquet said, “He got a chance to redeem himself. He felt like he let his teammates down, and you know that’s the hardest thing in the world when you feel like that. But getting that bunt down and executing it, he redeemed himself. Look, his teammates love him.”