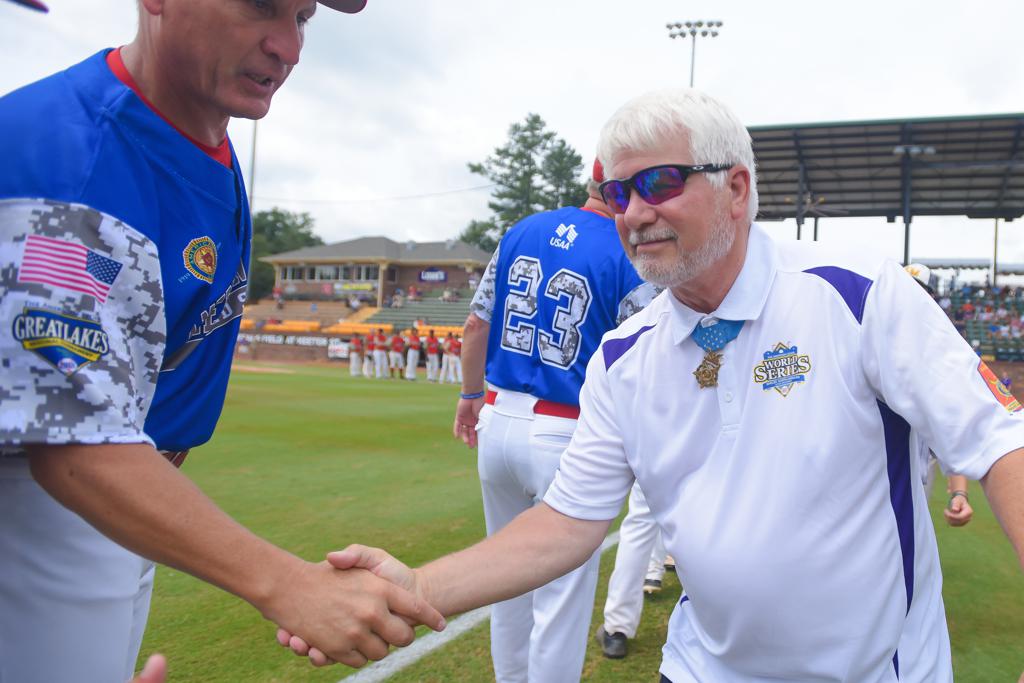 The two teams combined for 17 runs in winning their respective American Legion World Series openers. On Saturday, Midland stayed undefeated by holding off Las Vegas in a 3-2 victory.

“I knew it would be a tight game, we were going to see a good arm,” Midland coach Steve Cronkright said.

Indeed, the matchup between starters Josh Sharman and Adam Randall saw just one hit over the first 2 1 / 2 innings.

Randall got all the help he would need to pick up the win in the bottom of the third inning.

Logan LaCourse led off with a single but looked like he might be stranded after Midland’s next two batters were out. But Nick Dardas reached on an error to score LaCourse, then scored himself on a single by Tyler David. Martin Money then singled home David to make it 3-0.

“I felt my fastball was locating it well and my slider was my good out pitch, got a couple strikeouts off that,” Randall said.

Jimmy Gamboa had Las Vegas’ first hit with a leadoff single in the fifth. Randall got a groundout and flyout on the next two batters, but hit Jason Sharman with a pitch and gave up a single to Parker Schmidt which scored Gamboa, cutting Midland’s lead to 3-1.

Randall allowed just two hits and one run, with five strikeouts, in five innings of work.

“He’s been our No. 2 (pitcher) all year, throwing the heck out of the ball,” Cronkright said of Randall. “We’re really tickled with him because he threw a lot of pitches but he really worked. He’s a bulldog, and he’s going to get bigger and stronger.”

In the top of the seventh, Evan Schlatter gave up consecutive singles to Jason Sharman, Schmidt and Edarian Williams, with the third hit driving in Sharman to make it 3-2. But Schlatter struck out Chaison Miklich and Seth Gower came in to pitch the final out.

“Now that we’re 2-0 we can really start to do some fun things in the tournament and try to make a run and win it for Michigan,” Randall said.

The win puts Midland alone atop the Stars Division in pool play. The other two teams in the division, Randolph Co. (N.C.) Post 45 and Meridian (Idaho) Post 113, were scheduled to play in Game 8 later Saturday.