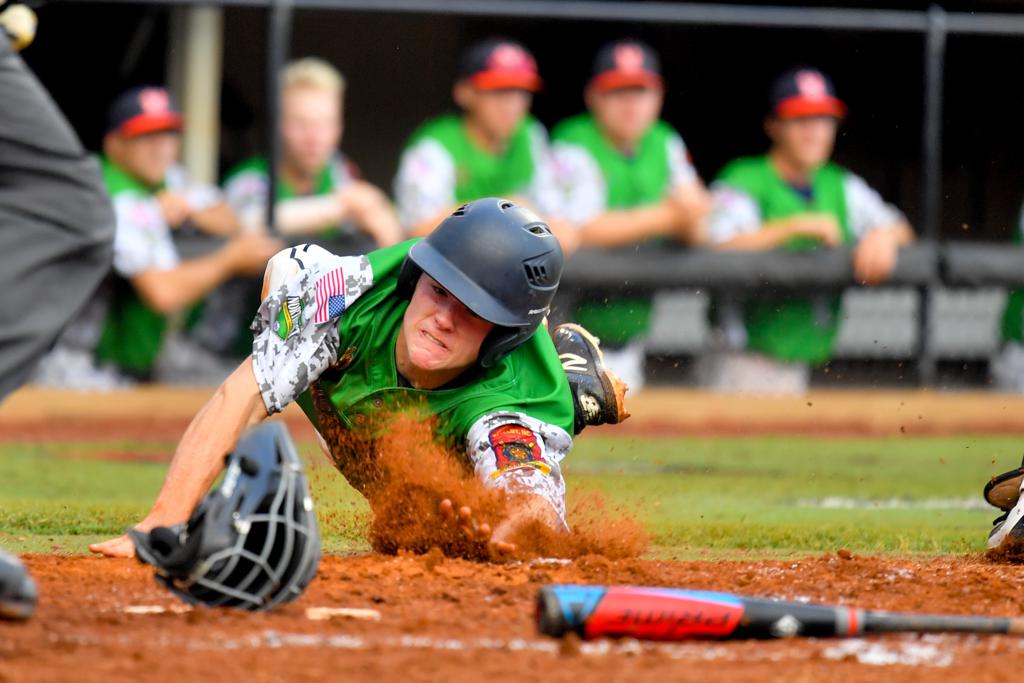 One big inning was all Meridian (Idaho) Post 113 needed to get its first win in the 2018 American Legion World Series. It just took a little longer than planned.

A downpour delayed the game between Meridian and Randolph Co. (N.C.) Post 45 on Saturday about two hours and pushed a ceremony honoring women veterans as part of USAA Military Appreciation Day to before the game. Then, in the top of the sixth inning, lightning prompted another delay, and an ensuing downpour forced the game to be postponed until Sunday morning.

Meridian increased its lead to 5-0 after a four-run third. Jon Milner singled to score Charlie Tentinger and Blake Jablonski, and Smith hit a sacrifice fly to drive in Mills. Riley Harrison followed with a double to score Milner.

Randolph County’s Tristan Marsh broke up Harrison’s no-hit bid with a leadoff home run in the top of the fourth — the first home run of the series. The next batter, Dawson Painter, reached on an error, and scored on Bryce Marsh’s single to pull the North Carolina squad within 5-2.

Bryce Marsh singled again in the top of the fifth, this time with two out, to drive in Blake Marsh and pull Randolph County within 5-3.

In the sixth, Trevor Marsh and Austin Curry opened with base hits before the lightning delay and downpour postponed the game. When play resumed Sunday morning, Alex Nielebeck, pitching in relief of Harrison, got three straight outs to get out of the jam.

In the bottom of the inning, Nielebeck grounded into a double play but Harrison scored on the play to make it 6-3.

Randolph County still had a chance, pulling to within 6-4 in the top of the seventh when Bryce Marsh doubled to drive in Tristan Marsh. But after giving up one more hit, Nielebeck got the final out to close out the win.