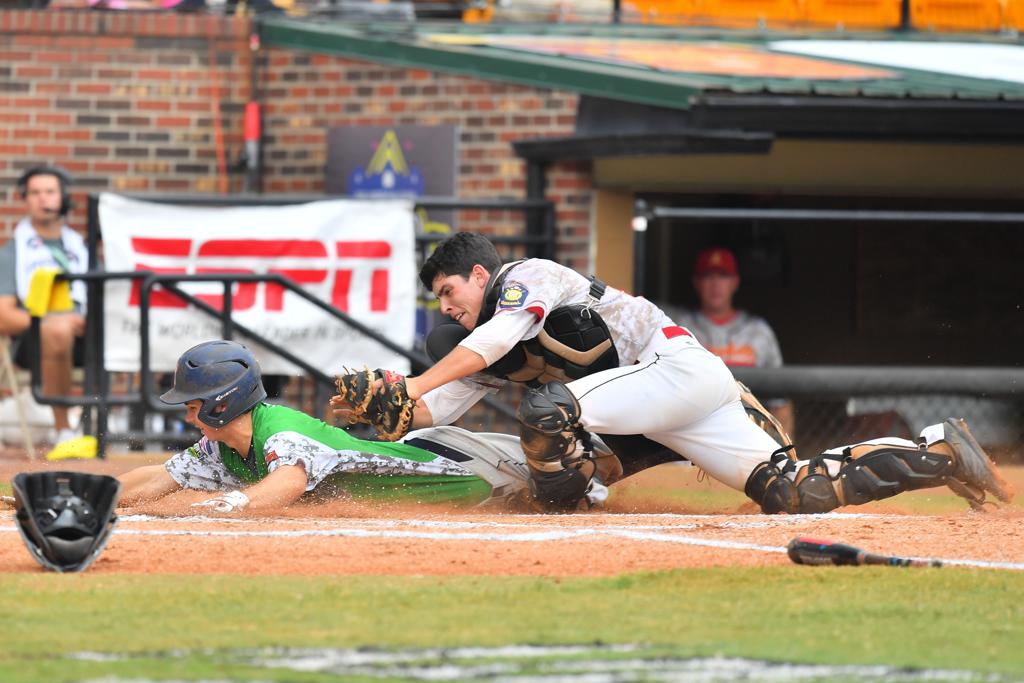 There would be no relying on tiebreaker formulas for Midland (Mich.) Post 165 to ensure they would advance to the semifinals of The American Legion World Series.

Meridian (Idaho) Post 113 took an early lead in Sunday’s final game of pool play, but Midland bounced back for a 5-2 victory at Keeter Stadium in Shelby, N.C.

Midland finished pool play with a 3-0 record in the Stars Division and will face Stripes Division runner-up Wilmington (Del.) Post 1 at 4 p.m. Monday in the ALWS semifinals.

Midland likely would have advanced even with a loss, but the Michigan squad wanted the win.

“You never want to play to not lose, so it’s a tough situation, but we got enough runs, pitching was good, we got a few guys in. That makes a big difference too, knowing that if you can just keep them to a certain amount of runs, you have a good chance of being there,” Midland coach Steve Cronkright said.

Needing a victory and some help, Meridian (1-2 in pool play) struck first. Carson Smith scored on a double by Riley Harrison in the top of the first, one of three hits Meridian notched in the inning.

Meanwhile, Midland had just one hit in the first two innings before opening things up in the bottom of the third.

With two out, Tyler David, Martin Money and Seth Gower hit consecutive singles, with Gower’s hit driving in David to tie the game. Then Brandon Smith doubled to score Money and Gower for a 3-1 lead.

Midland extended the lead to 5-1 in the fifth on Logan LaCourse’s two-run home run, just the second homer so far this year in Shelby.

Meridian would pull within 5-2 when Smith singled to drive in Braxton Mills, but reliever Jeff Allen threw a strikeout and induced a double play to close out the win.

While an undefeated record so far in Shelby is nice, Cronkright conceded it means nothing once the series goes to single-elimination.