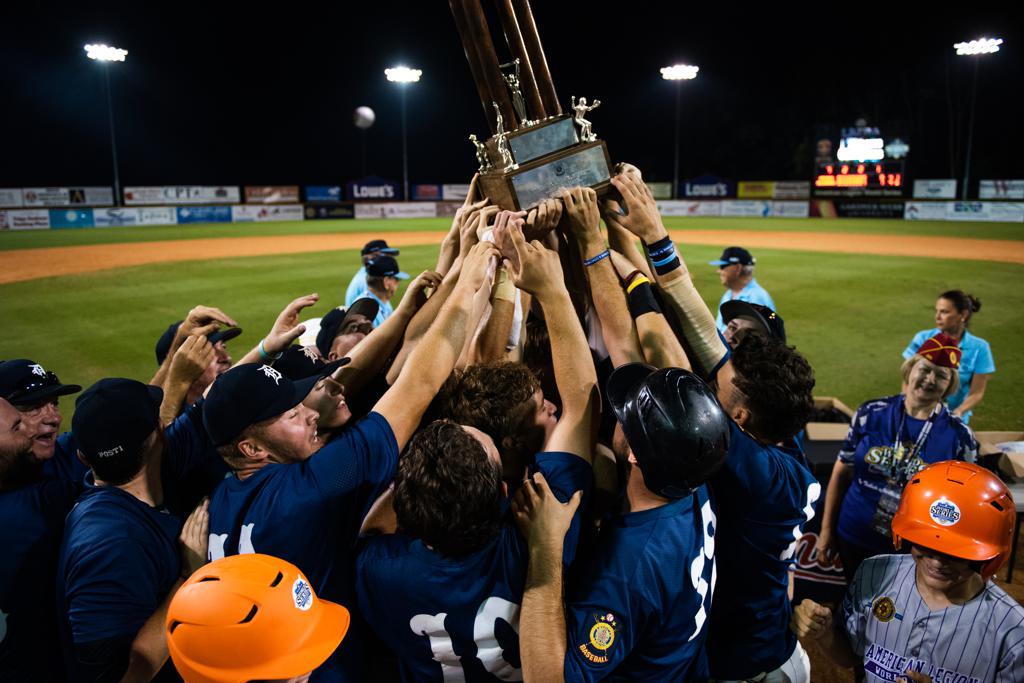 Nate Thomas knew the play was at first.

Thomas went head over heels and tossed a high arc to first base. Eric Ludman stretched out as far as he could.

The runner was out and the inning was over.

Thomas’ incredible defensive play in the top of the eighth inning helped save the game Tuesday night for Wilmington, and in the bottom of the inning, the Delaware team scored the only run they would need in a 1-0 victory over Las Vegas Post 40 in the championship game of the American Legion World Series.

The title is the first ever for a team from Delaware, whose teams had been 2-6 all-time in ALWS games before this year’s run.

Thomas’ big defensive play came a day after he pitched over an inning of relief in Wilmington’s semifinal victory over Midland (Mich.) Post 165, which also went into extra innings. Tuesday, Wilmington’s players and coaches called Thomas’ play a momentum changer.

“Nate made an amazing play there at the end to help us win,” said Wilmington pitcher Chris Ludman, who was named the George W. Rulon American Legion Player of the Year after pitching his second shutout in Shelby.

“Early on, I didn’t have my slider, so I was just trying to pound them across, throw strikes, pitch to soft contact, and my defense did a great job behind me,” Ludman said.

None better than Thomas, whose play helped keep the game scoreless heading into the bottom of the eighth.

Las Vegas’ Zach Czernawski led off with a single, just the fourth hit of the game for Post 40 (50-17). Ludman got the next two outs, but Jason Sharman’s grounder up the middle looked like it would extend the inning for the Nevada team.

“The runner on first was stealing so I actually had to break a little to second when I saw the play hit up the middle,” Thomas said. “I’m not very good at diving headfirst, but I saw the ball, laid out for it, I knew I wouldn’t be able to make the play at second … I just threw as hard as I could over to first.

“Thank God they were stealing on that pitch,” Chris Ludman said.

In the bottom of the inning, leadoff batter Michael Cautillo drew a walk off reliever Aaron Roberts. Chris Ludman, who had reached the maximum pitch count and came in to bat for Ryan Williams, laid down a sacrifice bunt to move Cautillo to second. On a 2-2 count, the next batter, Austin Colmery, singled to score Cautillo and kick off the Delaware celebration.

“That feels amazing. Coming into this season, we set high expectations, and I think we exceeded even our highest expectations tonight,” said Chris Ludman, who struck out three and walked none in eight innings of work.

Wilmington (38-4) missed some scoring chances earlier in the game, including a heady play by the Las Vegas defense in the sixth. Pinch-runner Nick Muzzi fell for a faked throw to second base by starting pitcher Josh Sharman and got caught in a rundown between second and third. Another attempted steal caught leadoff batter Jack Dubecq in the bottom of the seventh.

“We didn’t panic all season, we didn’t panic going back to June, we talked about taking a punch in the mouth and not get knocked out,” said Wilmington coach Brent Treml. “We had some self-inflicted punches today (with the mistakes on the base paths) but we didn’t give up, we didn’t panic.”

The loss spoiled a gem from Josh Sharman, who scattered four hits across seven innings while striking out eight.

“You’ve got to give credit to their pitcher, he threw an awesome game, so when he got out of the game, we thought this is our chance, we’ve got the momentum,” Treml said. “Could not be prouder of these guys.”

And now they head back to Delaware with the ALWS trophy.

“It’s something that these guys will take the rest of their lives,” Treml said.